Once in a while I treat myself.  Yesterday this treat arrived in the mail:

In art school they taught us art history.  Since I taught myself to embroider I consider it a good idea to home-school myself in the history of embroidery.

On page 5 Rozsika Parker (the author of the above book) touches on the hierarchy of art/craft:

“The art/craft hierarchy suggests that art made with thread and art made with paint are intrinsically unequal:  that the former is artistically less significant.  But the real differences between the two are in terms of where they are made and who makes them.  Embroidery, by the time of the art/craft divide, was made in the domestic sphere, usually by women, for ‘love’.  Painting was produced predominantly, though not only, by men in the public sphere, for money.  The professional branch of embroidery, unlike that of painting, was, from the end of the seventeenth century to the end of the nineteenth century, largely in the hands of working-class women, or disadvantaged middle-class women.  Clearly there are huge differences between painting and embroider;’ different conditions of production and different conditions of reception.  But rather than acknowledging that needlework and painting are different but equal arts, embroidery and crafts associated with ‘the second sex’ or the working class are accorded lesser artistic value”

This brings me to the f-word: Feminism….

“Moreover, because embroidery was supposed to signify femininity – docility, obedience, love of home, and a life without work – it showed the embroiderer to be a deserving, worthy wife and mother.  Thus the art played a crucial part in maintaining the class position of the household, displaying the value of a man’s wife and the condition of his economic circumstances…….Later the embroidery was blamed for the conflicts provoked in women by the femininity the art fostered.”  P 11 The Subversive Stitch.

I personally belief that a mother’s place is at home, with her children- at least for the first formative 5 years.  My own mother was a stay at home mom, but I’m sure she had dreams, because shortly after we were enrolled in primary school she started her own company and trained as a florist; but I’m grateful that she was at home in the beginning.

At the same time I dislike the fact that she was a very subordinate wife. 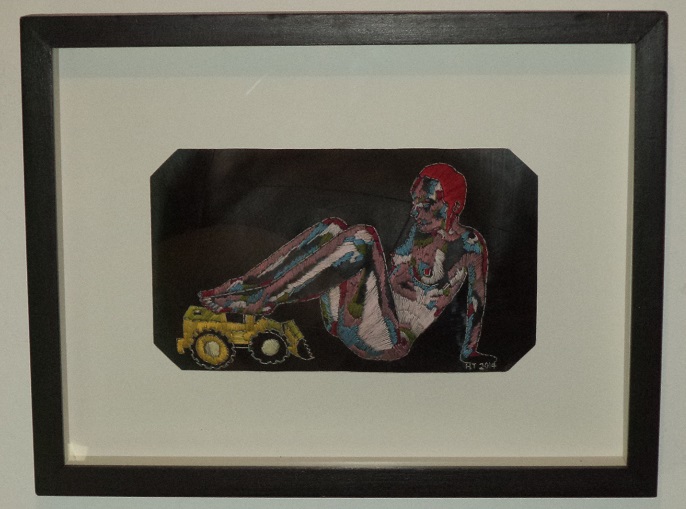 So before I become hysterical….lets move on from one f-word to another: “Freud”

“”By the end of the century, Freud was to decide that constant needle work was one of the factors that ‘rendered women particularly prone to hysteria’ because daydreaming over embroidery induced ‘dispositional hypnoid states.”  P12 the Subversive Stitch

I’m looking forward to see if this book will have an influence on my work and artist statement in the near future, but so far it’s a great read.