Yesterday I was pleasantly surprised when I received a notification that my work has been featured on a French blog: Le Blog du Kitsch. 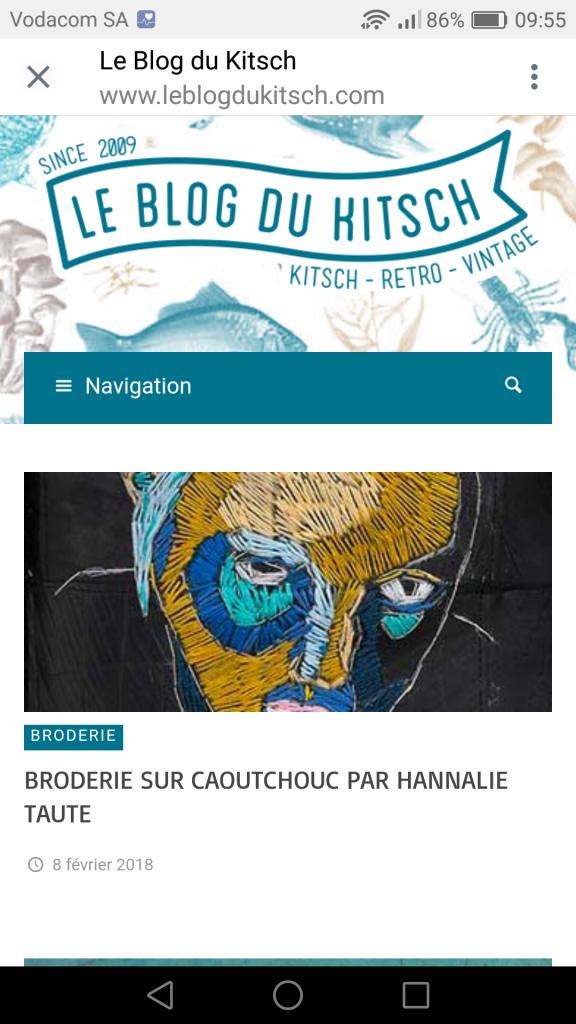 In their own words…about their blog:

The Kitsch Blog is originally a webzine dedicated to the culture of kitsch , retro and vintage . This translates into the dissemination of articles on these areas and the forms they can take in, among others, the arts, music, film, video games, graphics, illustration and the web. The blog has been around since 2009, so the editorial line of departure has necessarily evolved somewhat. We will therefore be interested in talking, but especially in seeing, everything that comes close to distance from the original themes

Usually, where I come from, Kitsch is a bad word…retro a bit better…but this made me think about the writings of Marlene Dumas…http://www.marlenedumas.nl/and-god-said-i-told-you-so/

I quote (my favourite parts, but you can read the full piece in the link above):

God saw that art was all alone,
so he put him to sleep and gave him kitsch…..

Or maybe, kitsch started with the fall from grace…

Kitsch started as a German word, they say.
Although I could have sworn it was an American invention
or something that they used to make in China.
But we shouldn’t blame the Germans for kitsch….

Kitsch is not pink,
if you want to give it a color, make it white….

Kitsch happened when we discovered that we
could imitate and reproduce, whatever we want ,
without having to believe in it; without having
to cry or die for it; we can represent
anything without paying for it, emotionally
Intellectually or spiritually, because others
have, or will, pay for it.

Being featured on a blog about Kitsch, retro and vintage…mmm, I’ll take it as a compliment. Thank you…

and I’ve learned the French word for Rubber! BONUS!

Link to the article down below

Have a great weekend everybody

5 thoughts on “Kitsch or Retro…you decide”

Widgets
1. The Ogre's wife
1. The dogs squeezed so hard that water came out of it
"In warm water"
1. Firestarter, the Dancer, a Lady and a little masochist
1. BOO-HOO
Enter 2022 with