I always wondered why 13 is considered unlucky…well here is one explanation:

“According to folklore historian Donald Dossey, the unlucky nature of the number “13” originated with a Norse Myth about 12 gods having a dinner party in Valhalla. The trickster god Loki, who was not invited, arrived as the 13th guest, and arranged for Hoor to shoot Balder with a mistletoe-tipped arrow. Dossey: “Balder died, and the whole Earth got dark. The whole Earth mourned. It was a bad, unlucky day.” This major event in Norse mythology caused the number 13 to be considered unlucky

Thank you for all the birthday wishes! Friday was my lucky day especially because it was the 13th …

but I must admit that after 44 years on this planet, I am still wondering:

What I do know is that Alfred Hitchcock was also born on that day, and to quote him:

“Drama is life with the dull bits cut out.”

My dear friend Karen (who I know for almost 2 decades now) and I are also very lucky to celebrate our birthdays on the same day.

So roll out the red carpet, because we started celebrating a week ago already like two queens of the celestial jungle, who never tire of lavish and exclusive parties. 😉

I am also happy to announce that Ronell Pitout was the lucky recipient of the Choc bunny that was a giveaway at the opening of the Thread(ed) exhibition in Pretoria which opened a day after my birthday. I could unfortunately not attend the opening, but I am happy Bunny found a home.

On that note….I will leave you with a quote from Mr Hitchcock:

“There is no terror in the bang, only in the anticipation of it.”

So until next time my friends, remember:

4 thoughts on “Luckily I don’t suffer from Triskaidekaphobia…” 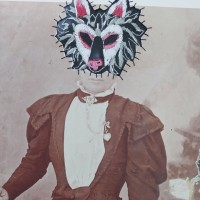