I’m also participating in another exciting group exhibition: Bosch in Africa! Curated by Sandra Hanekom, and inspired by Hieronymus Bosch of course.

I’ve made 6 small pieces for this show.  I like to refer to these as my:

They were inspired by the pages in a lovely book called: Kinderland.

I used some pages which made reference to witches and decided to embroider some Boschian characters on rubber. 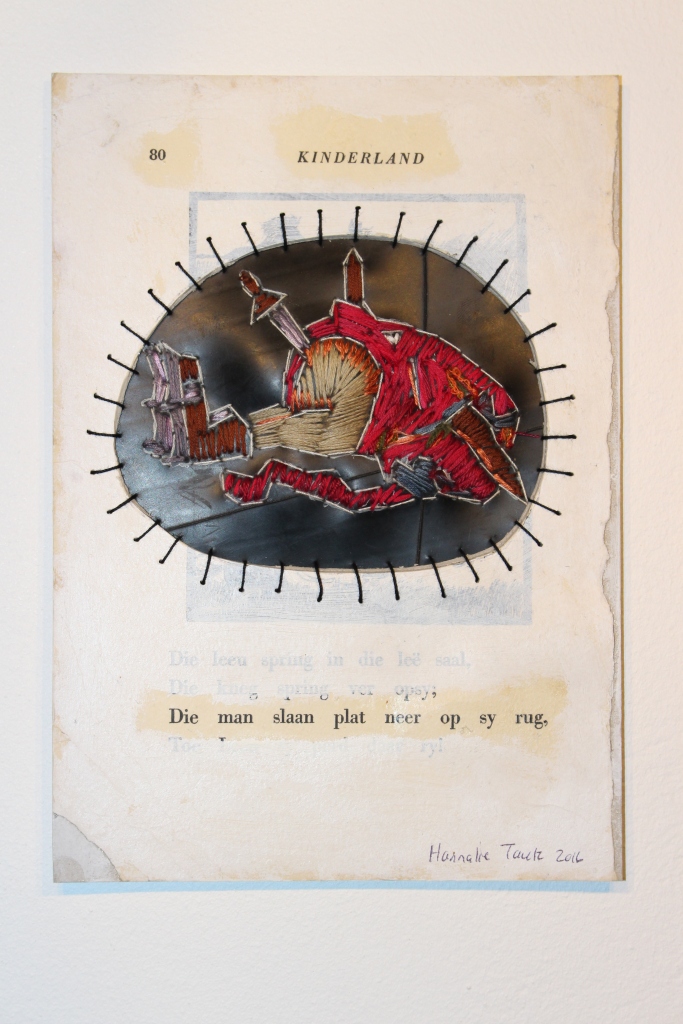 All the above have been framed for the exhibition, but unfortunately I don’t have photos of it except for this one: (which should give you an idea of what they look like now)

If you want to see more about this exhibition, then check out their page on Facebook.  I am not on Facebook anymore otherwise I would have added a link for you 😉

The Woordfees in Stellenbosch runs from the 1st of March until the 12th. Enquiries: zelda.hamilton@gmail.com 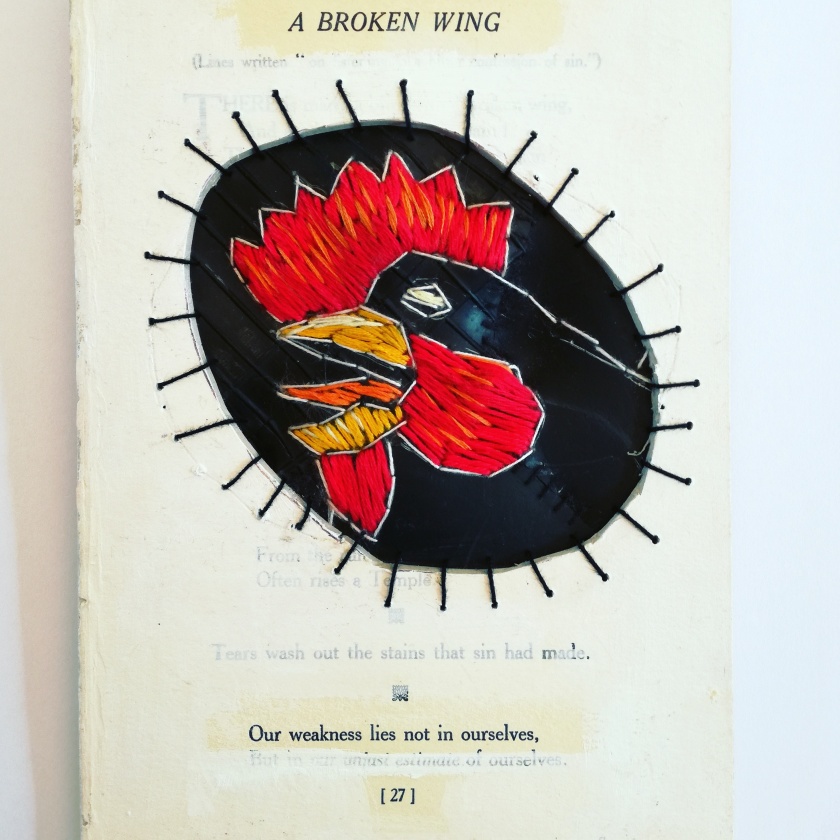 The Lunar New Year was recently celebrated across the globe. According to some cultures we entered the “Year of the Rooster.”

I am fascinated by Astrology, even if I do not practice or study it on a daily basis.  Astrology makes me think about the quote by Stephen Hawking:

“Remember to look up at the stars, not down at your feet.  Try to make sense of what you see, and wonder about what makes the Universe exist.”

Random fact: Years ago, after I read the book “The power of One” by Bryce Courtenay, I wanted to have a pet rooster, but never had the opportunity.

It is said that : Roosters can be strangely complex, and sometimes they just won’t fit in. (quote found when I searched Rooster behaviour on the internet).

While on the subject of not fitting in: I’m not sure how Horoscopes (I like to call it “horror-scopes”) fit in with Astrology, but when it comes to ‘horoscopes’, I think about a quote by John Berger:

“Prophecy challenges our common sense and view of time.”

According to the Bulletin of the Atomic Scientists, it’s now only two and a half minutes to midnight. We’re talking about the Doomsday Clock, of course. This week, the BAS’s Science and Security Board moved the clock’s hands 30 seconds closer to midnight. Why, you ask?!? Excellent question!  As stated in their 2017 Doomsday Clock press release: “Over the course of 2016, the global security landscape darkened as the international community failed to come effectively to grips with humanity’s most pressing existential threats, nuclear weapons and climate change … This already-threatening world situation was the backdrop for a rise in strident nationalism worldwide in 2016, including in a US presidential campaign during which the eventual victor, Donald Trump, made disturbing comments about the use and proliferation of nuclear weapons and expressed disbelief in the overwhelming scientific consensus on climate change …The board’s decision to move the clock less than a full minute — something it has never before done — reflects a simple reality: As this statement is issued, Donald Trump has been the US president only a matter of days …” What do you think? Let us know in the comments (and play nice!).

It was the first time I heard about the “Doomsday clock” (it turns out after some investigation that this ‘clock’ has been around for a while, but it seems that I live in a bubble) I found the concept of this clock very depressing! Why would humans ‘create’ something like this? Also the thought that one person could ‘alter’ the clock with something he/she says is very disturbing…I would not want to be in that person’s shoes.

anyway….talking about ‘depression’- I’ll leave you with this quote from Tom Robbins:

“All depression has its roots in self-pity, and all self-pity is rooted in people taking themselves too seriously.

The key word here is roots.  The roots of depression.  For most people, self-awareness and self-pity blossom simultaneously in early adolescence.  It’s about that time we start viewing the world as something other than a whoop-de-doo plaground, we start to experience personally how threatening it can be, how cruel and unjust.  At the very moment we become, for the first time, both introspective and socially conscientious, we receive the bad news that the world, by and large, doesn’t give a rat’s ass.  Even an old tomato like me can recall how painful, scary, and disillusioning the realisation was.  So, there’s a tendency, then, to slip into rage and self-pity, which, if indulged, can fester into bouts of depression.

Now, unless someone stronger and wiser – a friend, a parent, a novelist, filmmaker, teacher, or musician – can josh us out of it, can elevate us and show us how petty and pompous and monumentally useless it is to take ourselves so seriously, then depression can become a habit, which, in turn, can produce a neurological imprint.

Are you with me? Gradually, our brain chemistry becomes conditioned to react to negative stimuli in a particular, predictable way.

One thing’ll go wrong and it’ll automatically switch on its blender and mix us that black cocktail, the ol’ doomsday daiquiri, and before we know it, we’re soused to the gills from the inside out.  Once depression has become electrochemically integrated, it can be extremely difficult to philosophically or psychologically override it, by then it’s playing by the rules, a whole different ball game…..

And that’s why when you’ve exhibited the slightest tendency toward self-importance, I’ve reminded you that you and me – you and I: excuse me- may be every bit as important as the President or Pope or biggest prime-time icon in Hollywood, but that none of us is much more than a pimple on the ass-end of creation, so let’s not get carried away with ourselves.

p44 and 45 from the book: Fierce invalids home from hot climates by Tom Robbins

Apologies for the long quote, but it is just so good, that I could not bear to shorten it. 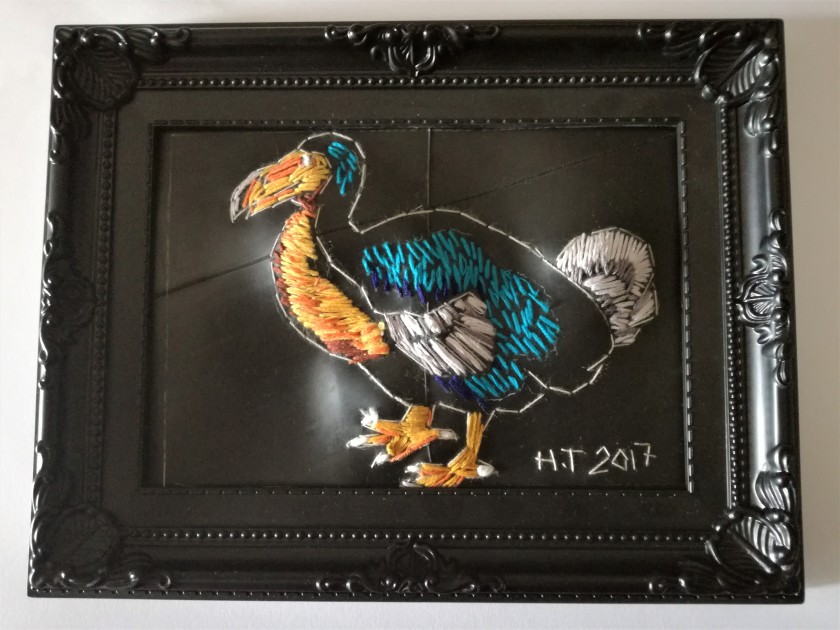 These altered pages will be on view at 99 Loop gallery in Cape Town as part of their group exhibition: Alteration, which opens tomorrow night…so if you are in the area please join them at 6pm for a glass of wine. 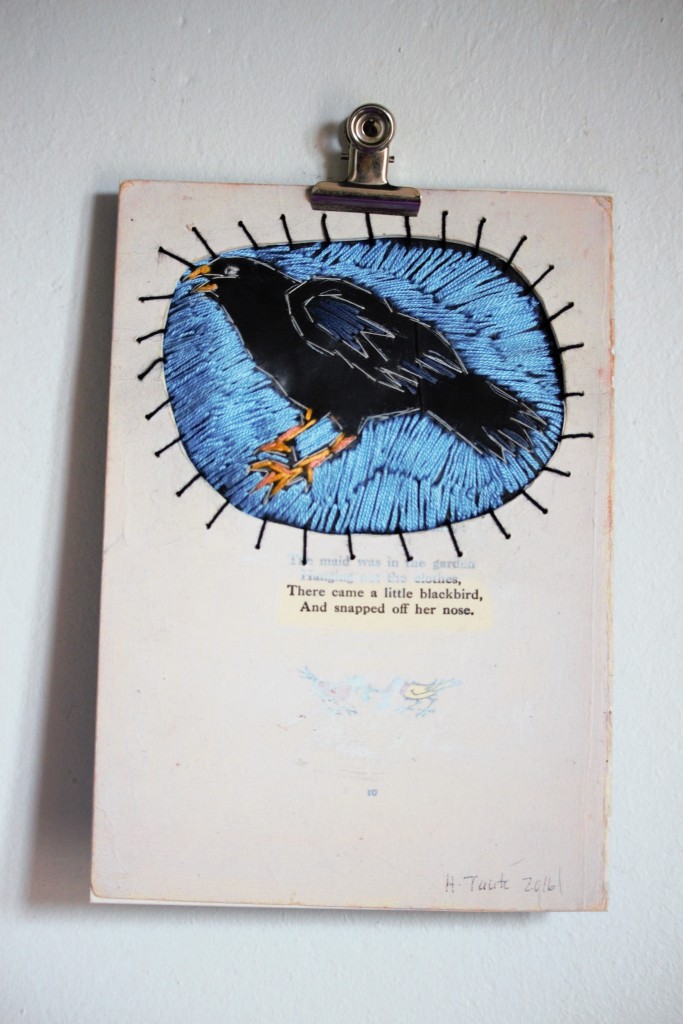 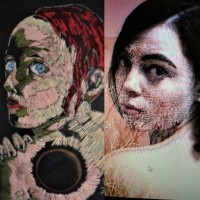